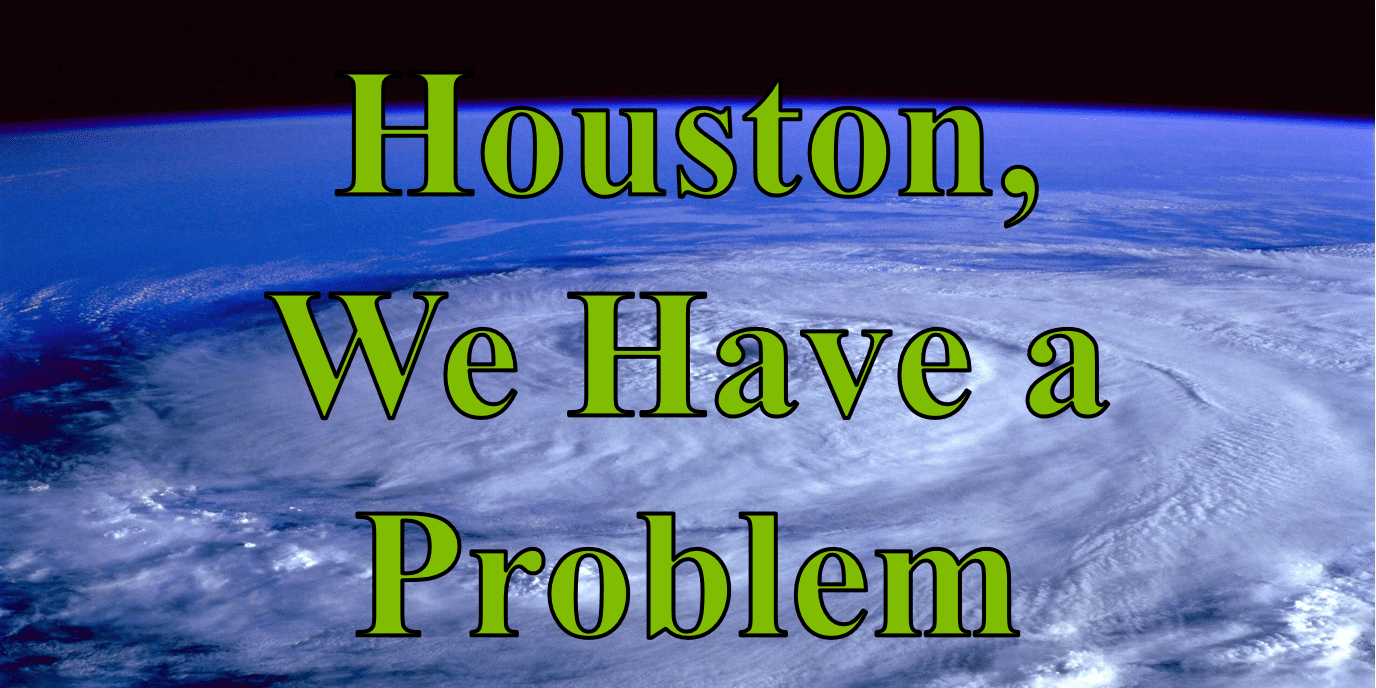 Hurricane Harvey’s arrival in Houston left a lasting impression.  There were the obvious impacts:  Homes and businesses were destroyed, and lives were lost.  There were also invisible impacts:  flood damaged buildings and possessions grew mold and apparently, yet more toxins touched people’s lives.  Other articles have addressed the mold toxins in the water damaged Houston, but a recent article highlighted additional toxins which Houstonites were exposed to immediately afterwards.

We live in a toxic fishbowl of our own making.  The industrial revolution is pumping out clouds of chemicals into the air and tons of chemical products into our lives.  While we benefit from many conveniences on the surface, we are learning that we also suffer the effects of their toxicities.  Pesticides, herbicides, petro-chemicals, phthalates, plastics and polymers, and many more soak both our world and our bodies.  At some point, they rise to high enough levels that chemical, enzymatic, hormones, neurologic, mitochondrial, and even carcinogenic changes occur.

A field of researchers spend a lot of time thinking about what happens when disasters like hurricanes strike a city.  Do the residents experience an increased rate of exposure to some chemicals?  Do superfund sites, locations where excessive levels of toxic chemicals have been dumped, release more toxins when they are flooded?  Then they can consider what effects these exposures might have on humans and what could be done to either prevent or to treat.  This was particularly interesting given the proximity of 41 Superfund sites near Houston, 13 of which were affected by the flooding.   The potential for unplanned chemical exposure was high.

A group of researchers worked a quick response with an innovative monitoring method after Hurricane Harvey in Houston in 2017.  The use of silicone risk bands to absorb chemicals in the environment of test subjects had been validated by a few dozen other studies.  These wrist bands were easy to distribute, did not require blood or urine test samples, and allowed testing of 1500 different possible chemicals.  While the bands would not directly measure the chemicals ingested by their wearers, they would absorb and hold in their polymers both chemicals in the air and chemicals excreted in the sweat.  Prior studies demonstrated good correlations between chemical exposures and other body fluid sampling.

While 137 chemicals were detected at the 2018 baseline, 162 different chemicals were detected in 2017 post hurricane.  The overall toxic burden was higher in 2017 for all except phthalates.  As they note, “Out of the 162 unique chemicals detected post-hurricane, there were 36 PCPs, 41 pesticides, 14 flame retardants, two pharmacological compounds, four PCBs, 25 PAHs, 10 phthalates, and 30 industrial compounds. Alternatively, the 137 individual chemicals detected at the estimated baseline contained 31 PCPs, 32 pesticides, 11 flame retardants, two pharmacological compounds, one PCB, 14 PAHs, 11 phthalates, one dioxin/furan, and 34 industrial compounds.”

The article provides a greater degree of detail, but for our discussion, we can see that both daily life and extraordinary disasters expose us to a wide variety of potentially dangerous chemicals.  Urbanization and industrialization has provided legitimate benefits, but we cannot ignore the potential consequences of continued toxin exposures.  Maybe other studies will track the consequences of these toxic exposures for Houston residents.  For now those of us in functional medicine keep looking for these toxins in our chronically ill patients and working to limit exposures while removing them from their bodies.  This is a big step towards helping them live healthier more abundant lives.  We also work to educate not only our patients, but you our readers and followers on the importance of your toxin exposure awareness. Prevention will save a lot of time and money spent recovering after exposure.