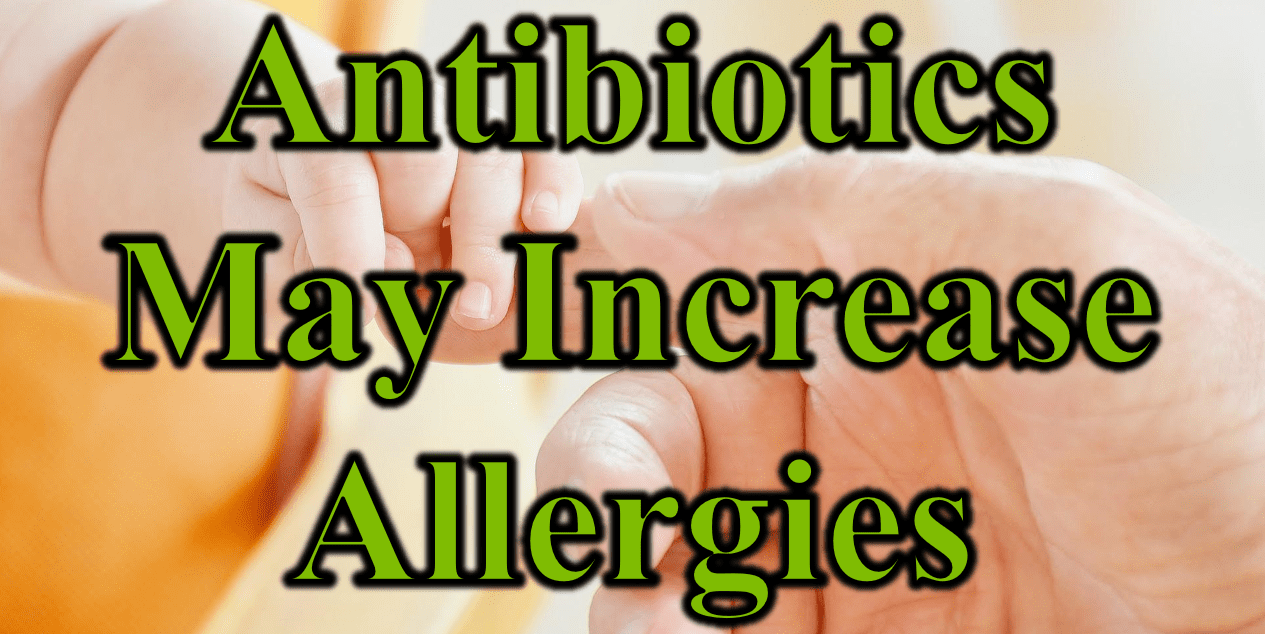 Many would confidently assert that antibiotics have changed the course of medical progress while others would just as vigorously assert that antibiotics can change the course of one’s life in less-than-positive ways.  Yes, antibiotics have saved the lives of many who would have otherwise succumbed to some overwhelming infection. Yes, even without resorting to the life-saving benefits of antibiotics, one can recognize that the miseries of sinus infections, bladder infections, and other less scary infection have been minimized by antibiotics.  However, stopping here would be like extolling the virtues of a hammer and its contributions to building without mentioning all the bloodied thumbs and not a few bashed skulls when hammers were used without skill or with malintent.  Likewise, antibiotics also have a dark side, one of which is their effects on gut bacteria and in this particular medical study, effects on the development of allergies.

Our gut microbiome has lived with us for millennia even before science discovered the hundreds of millions of bacteria living symbiotically in our GI tract.  Hundreds if not a thousand different species of bacteria along with a few benign parasites and fungi like yeast, not to mention probably trillions of bacteria viruses float around our colon.  There they do far more than sit like a couch potato watching food pass by nibbling here and there.  They actively participate by processing, defending, and stimulating multiple other pathways and processes.  They help detox chemicals entering with our food.  They process nutrients to help us get more out of our food.  They inhibit bad bacteria and fungi from getting a foothold in their neighborhood.  They help the mucosal boundary of our intestines, preventing unwanted inflammation and entry of harmful bacteria.  They influence what chemicals enter the bloodstream, even influencing brain function. They work out the immune system so that it is prepared for real invaders.

Rarely do antibiotics act like a sniper rifle when targeting the bad bacteria causing infections.  Instead, they act like shotguns and hand grenades.  The friendly bacteria of our microbiome take a hit as well.  This hit may resolve in days to weeks after the antibiotics are stopped, or may continue on for months, even years, even permanently affecting which bacteria live in our gut neighborhood.  This study goes even further in suggesting that the next generation of children may be affected by these changes.

The study authors did not do these experiments on human babies, so we can take the results with a little grain of salt, but their tests on mice indicate that early life antibiotic exposure not only changed the bacteria in the baby mice guts but influenced the rate of allergy development.  They used 3 sets of mice, one exposed to the antibiotic amoxicillin, one expose to the antibiotic azithromycin, and one only exposed to water. Later they exposed the sets of mice to dust mite allergens.  Those with prior exposure to antibiotics, especially azithromycin, demonstrated higher levels of immune responses along the allergy pathway. They had higher IgE antibody levels and higher Th2 responses indicating higher allergic responses.

As interesting as this finding was, their next level of results strikes one as even more fascinating.  When they tested non-antibiotic exposed mice by later giving them bacteria from the antibiotic exposed mice, these late-exposure mice did not develop such allergic immune responses.  This confirmed their hypothesis that early exposure was the bigger problem.  What is so fascinating was the final step.  The offspring of these secondarily exposed mice did develop more allergic immune responses.  In other words, the bacteria which had been changed in the early antibiotic exposure mice, continued in the mice parents, passed to their infants, and caused allergic immune changes in the next generations.

In simple terms, not only could early life antibiotics affect the immune systems of mice, but mice carrying those bacteria could pass that effect on to their offspring even if the offspring did not receive antibiotics in their early life. Basically, an infant mouse receiving antibiotics could trigger not only their allergic response, but the same response in their children.

If this does apply to humans, then giving your child an antibiotic early in life may not only affect their risk of allergies and asthma, but a risk in your grandchildren as well.  Fascinating and concerning indeed. Now, don’t get me wrong.  Sometimes antibiotics are necessary for life threatening infections, even infections that are just mildly to moderately harmful.  My point is two-fold beyond recognizing the pros and cons of antibiotics.  First, by knowing the cons, one can determine if the risk is worth it.  If an infection is more likely a virus, maybe antibiotics can be avoided or even if a bacterial infection is suspected a natural therapy could be tried first.  Second, if antibiotics are deemed necessary, we need to consider methods to lessen the impact of those antibiotics on the gut.  We need studies looking at whether diet, probiotics, or other therapies might remove the allergic response risk.

Good medicine, whether functional or conventional, must consider the pros and cons of anything they do as well as appropriately address the side effects and consequences of their therapies.  Helping patients live healthier, more abundant lives requires this daily practice.