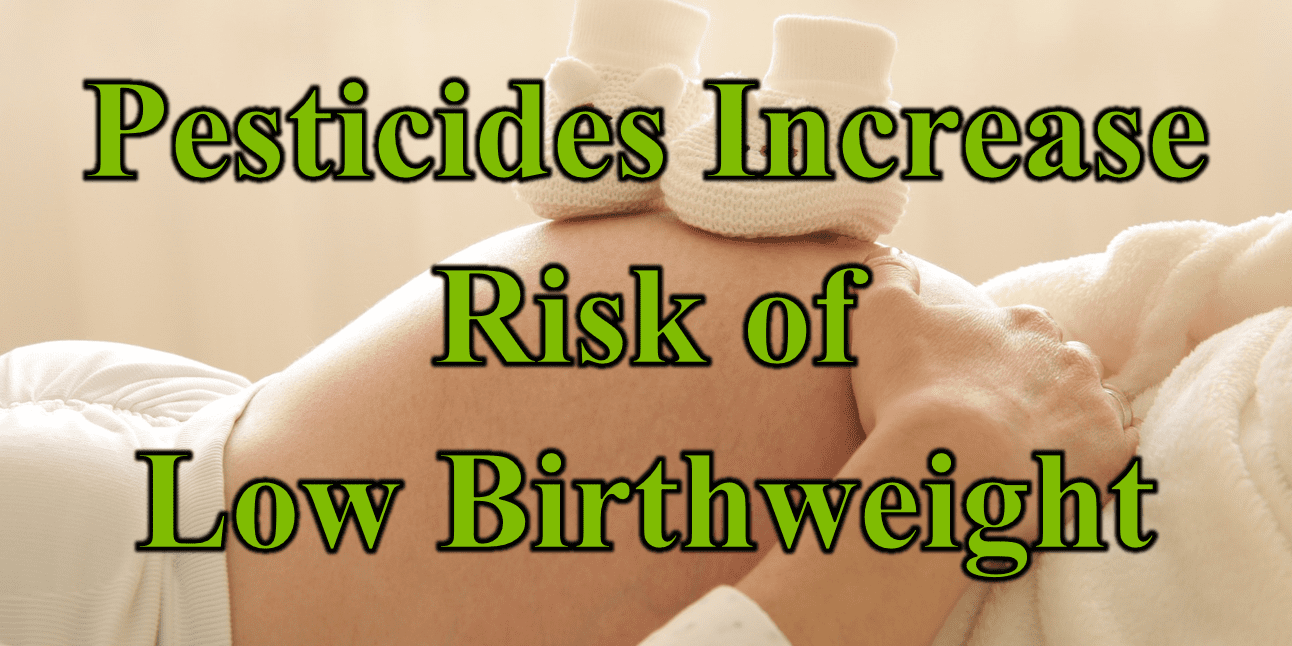 This common herbicide in your food and in your yard increases the risk of lower birthweight in high-risk pregnancies and appears to increase the risk of a neonatal intensive care unit admission.  With 8% of U.S. births falling into a high-risk category due to some other health factor in the mom, many babies enter the world at risk of complications that may last for a lifetime.  Some of these factors even put their lives at risk.  The widespread exposure of the mothers to glyphosate in prior studies combined with the indications of fetal harm in animal studies, a better understanding of the effects of glyphosate in humans is urgently needed.  This study took a step towards answering some of the critical questions by asking if glyphosate may worsen the outcomes of these already high risk pregnancies.

Glyphosate may be the most well-known and most widely used herbicide in the US, both commercially and residentially.  This herbicide is used on a variety of grain crops to kill weeds and grasses as well as in yards to control similar weeds.  It was first introduced in the 1970s; since its initial c. 7 million pounds per year in that decade, usage has grown to 276 million, according to a 2014 record (1).  It primarily works by inhibiting an enzyme found in plants which produces essential amino acids.  When this enzyme is inhibited, the plants cannot produce necessary amino acids, and thus they die.  Initially, this process’s isolation in plants was believed to mean that vertebrates including us humans would not be affected.

Over the years, further study has found the enzyme pathway in other organisms, including the bacteria in our GI tract.  Effects of the chemical have also been found in other biochemical pathways, such as the acetylcholinesterase pathway of animals, which can affect the nervous system.  Increased amounts of oxidative stress have also been noted which can affect a variety of health conditions.    These effects have been shown to manifest in birth defects, fetal loss, and decreased reproductive function in animals such as chickens, frogs, and other mammals [7,8,9].  Various other studies have demonstrated other adverse effects including transgenerational effects, meaning that the offspring and even grandchildren of exposed animals demonstrated adverse effects (13,14).

Human studies are limited, but prior to this study, others suggested potential for harm.   One study out of Ontario found an association with increased spontaneous abortion (1).  In California, an increased risk of autism spectrum disorder was noted (16).  This group had done some preliminary research and found the 93% of women with low-risk pregnancies had levels of glyphosate in their urine that was detectable and correlated with shorter durations of pregnancy (18).  The Infant Development and the Environment Study (TIDES) did link higher urine glyphosate with shorter pregnancies (19).    Obviously, these findings are all very concerning.

Building on these prior studies and their own research in low-risk pregnancies, they wanted to look at the risk of glyphosate exposure on high-risk pregnancies.  Working with a Maternal Fetal Medicine clinic based in a university setting, they evaluated the levels of glyphosate in 155 women from first trimester urine samples and followed them to measure how many were exposed and if any had lower birthweight outcomes or increased neonatal intensive care unit admissions. They started with 187 pregnancies but excluded 32 due to fetal losses prior to birth.  186 of 187 of the initial pregnancies demonstrated levels of glyphosate in the urine.

Ultimately, this study correlates higher levels of glyphosate in human mother urine with lower birth weights in this high-risk pregnancy group.  There was also a trend towards higher admission rates to the NICU, though it was not statistically significant.  These results, when added to prior animal studies, should prompt several responses.  First, we need further research to further confirm this or other links with adverse pregnancy outcomes if we are to make proper personal and public policy decisions.  Second, women of child-bearing age should consider their exposure risk and lower their exposure to his ubiquitous chemical as much as possible immediately.  Third, we need open and honest consideration of public policy to limit and possibly abolish the use of this chemical.

To restore healthier more abundant lives and start future lives off for the next generation, we need knowledge applied with wisdom and courage.  We guide our female patients in preparing for pregnancy to limit toxic exposures of all types including this herbicide.  We educate the public with articles like these.  We pray for a day when pregnant women do not need to fear their food supply or their neighbor’s yard or public parks where glyphosate may have been sprayed.  Don’t give up hope for that day to come with your help.