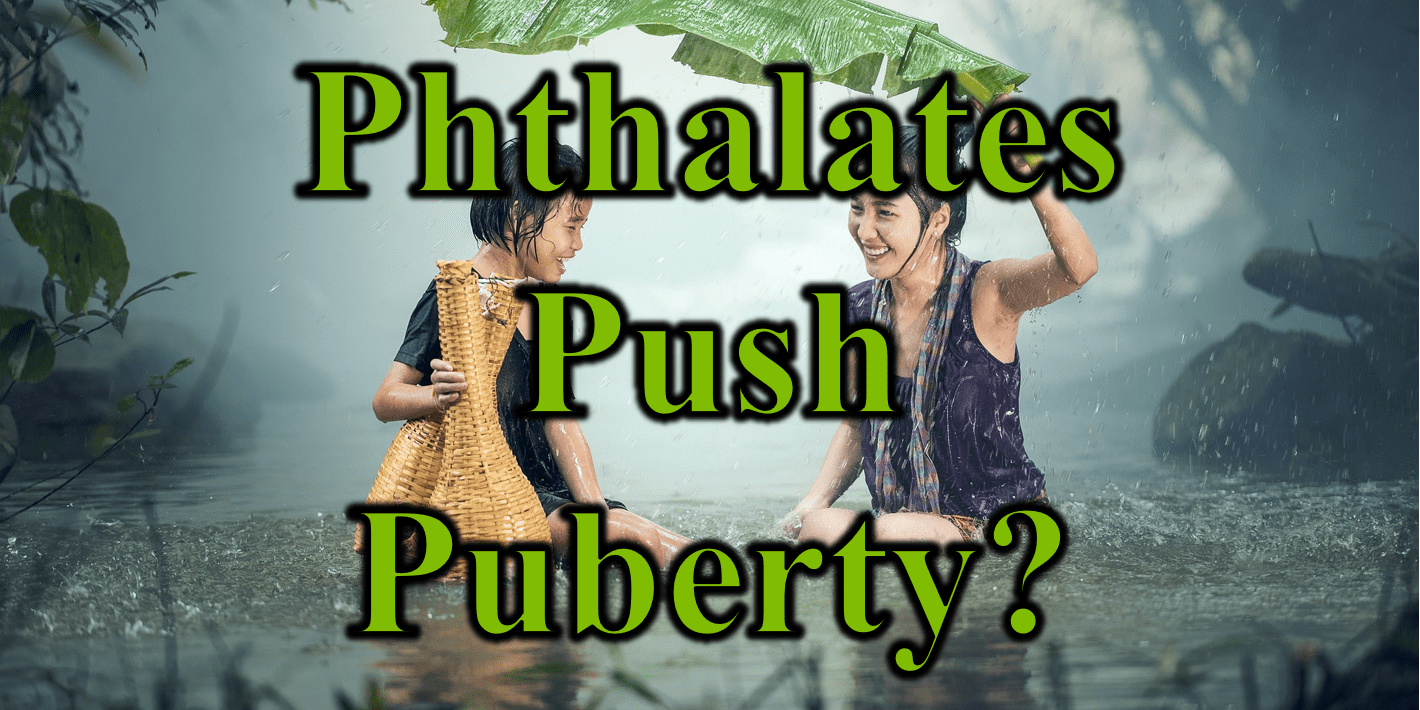 The awareness of environmental chemical effects on human health has grown over recent years as more and more studies point towards measurable effects.  Simultaneously, medical understanding of the hormonal receptors and these chemicals’ structures allow more direct connections to be made at a mechanistic level.  Regardless, much of the work begins with studies like this one which indicates a correlation (though not necessarily a causal link) between increasing phthalate exposure during childhood and changes in the timing of puberty’s onset.

Various studies looking at the trends of when puberty starts in girls indicate that it is beginning earlier and earlier (1,2).  Among the theories, increasing pediatric obesity and the prevalence of endocrine disrupting chemicals (EDC) have been blamed (3,4).  Various mechanisms have been proposed including effects at the signals themselves, the receptors at different step in the hormonal pathway, and the target organs themselves (5).  Besides the simple earlier onset, many other health impacts have been documented from effects on cardiovascular disease to endocrine cancers to shorter adult height and more (6).

With these facts in mind, researchers are searching to identify the specific chemicals which are driving this early onset of puberty.  Phthalates have received a lot of attention for a number of reasons.  They are known to exert anti-androgenic effects both in animals and in in vitro studies (7,8,9,10).  Other studies indicate that they affect timing of pubertal development (11,12,13) and other anatomical or sexual functions (12,13,11).  Given the widespread use of phthalates as plasticizers and as fragrance retainers (14), the potential for high exposures across millions of people could produce profound societal impact (15,16).

The study in focus approached the question from an epidemiological standpoint to determine if higher levels of any particular phthalate might alter the onset of puberty.  They found that the exposure of children in the mother’s womb to certain phthalates did correlate with earlier onset of puberty under certain conditions.  Children who were found to have a higher prenatal exposure of specific but not other phthalates had a slightly higher risk of developing puberty between 7 and 10 years of age.  Exposure to DEHP (di-(2-ethylhexyl) phthalate), DEP (di-ethyl phthalate), and DnBP (di-n-butyl phthalate) were found to have effects that were also affected by the presence or absence of childhood obesity.  Childhood obesity increased the rates of puberty effects.

In functional medicine, we have been alerting our patients and the public to these concerns for years.  Everyone can agree that the age of puberty is falling, but we argue that the new normal of puberty starting in some children under 10 years of age is unacceptable.  The medical world is aware of the negative long-term impact of such early onset puberty and its costs to both the individual and to society.  Studies like these and its references should motivate change in medicine and our nation.  We must address the current developing crisis and work to prevent further chemicals being released into production that might further exacerbate the problem.

Helping our patients and their families and their communities start and carry out healthier more abundant lives requires that we both treat the individual sitting across from us as well as speak out for the sake of the public we may never see face to face.  Consider your role in this work.  Do what you can to limit and avoid phthalate exposure whether you are pregnant or not.  If the market pressure against these chemicals grows strong enough, we won’t need governmental enforcement.  At the very least, keep your own exposures to a minimum for your sake and for the sake of the next generation.

Other References: (some references only available in the full article after payment)