Molds come in all kinds of varieties: Toxic, allergenic, infectious, some affecting only some animals, some only causing certain organ effects, others causing little harm outside their mold neighbors. Their greatest variety of tricks probably come in terms of their different toxins, each with some of the oddest names. You have your trichothenes, your fumosinins, your gliotoxins, your ochratoxins, your aflatoxins, and more. Over the last decades significant research has been put into these toxins mostly due to their negative health effects on animals, but there is also solid research regarding effects on humans. While many in medicine do not recognize these toxins as major factors in human health, several studies below between animals and humans indicate scientists know a lot more about mycotoxin’s effects on our health than is commonly accepted.

Let’s review a good introductory summary describing the known effects of these toxins on animals including humans. This paper works through the 6 major classes of mold toxins: Aflatoxins, ochratoxins, zearalonone, fumosinins, trichothenes, and patulin (1).

Aflatoxins, a group of similar toxins, stand out as some of the more well-known toxic weapons of molds given their carcinogenic effects on the liver. They are credited with killing 100,000 turkeys as Turkey X disease in 1960 Britain. A suspected Indian outbreak in the 1970’s claimed the lives of 100 people (2) They grow on a number of cereals, pistachios, almonds, walnuts, and cottonseeds. Cow milk can also concentrate the toxin and survive the cheese making process. (3) The effects of aflatoxins vary from the immediate to the chronic. They may cause cancer, birth defects, liver toxicity, and immune suppression. The FDA recognizes the impact of this mycotoxin by having set action levels to protect us.

Aflatoxin B1 example from Chemspider.com 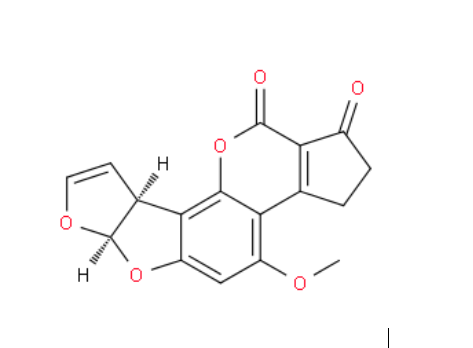 Ochratoxins were discovered in South Africa in 1965 as being produced by certain Aspergillus and penicillium species. It has been found in a number of products such as flour, coffee, barley, corn, wheat, rye, and in wine, grape juice and dried wine fruits (4, 5) Animal products like meat and milk also have been found to have significant levels of Ochratoxin A. In all of these products, they can resist high temperatures and continue despite normal cooking conditions (6). These mycotoxins may cause cancer, kidney damage, or liver damage. (7) Other research points toward immune suppression, neurotoxicity, and harm to pregnancies (8) as well as inhibiting DNA and RNA synthesis (9) 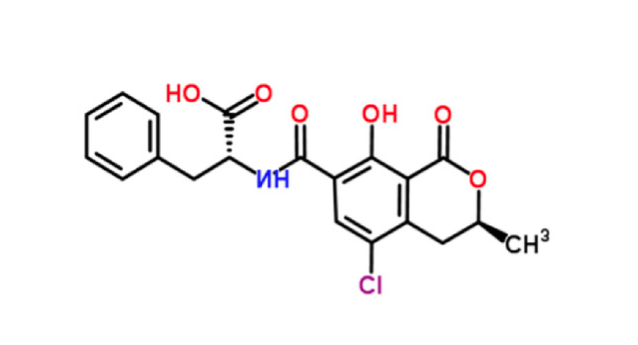