How Mold Hurts You 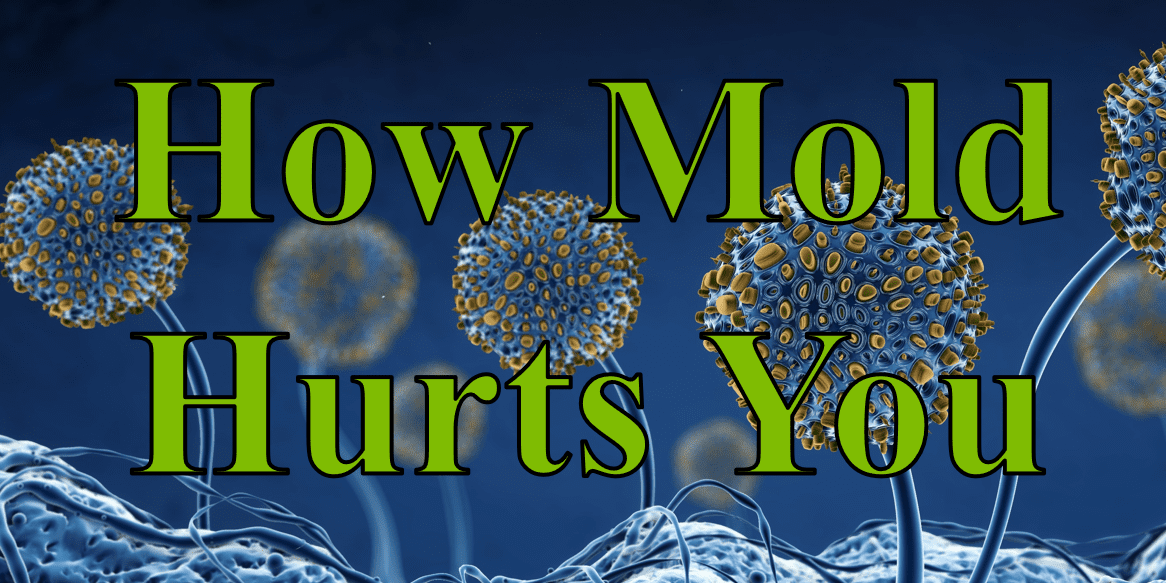 For those who suffer from mold toxicity, ‘Is this mold?’ is rarely relevant. They know the answer. On the other hand, they really want to know how or why it is happening.  They see others around them in the same environment who are not sick, but they themselves suffer greatly.  In the end, it comes down to a combination of genes and environment.  Many across the world have genetics which make it unlikely that mold will affect them, unless they reach extremely high exposure levels.  Some, however, can become very sick at a much lower levels of exposure.  This article looks at the other half of the equation, the environment, considering which compounds from molds can cause which biochemical changes, thereby leading to disease.

The article in focus describes a few different mechanisms by which mold can adversely affect human health.  These include Beta glucans, hydrophobins, volatile organic compounds (VOCs), mycotoxins, and stachylsins.  While mycotoxins are likely the primary non-infectious and non-allergenic mechanisms, the others deserve some attention.

The beta glucans arise as part of the cell walls of the molds but can also be produced by plants and some bacteria.  Our bodies can react to these beta glucans through receptors on our immune cells, and trigger release of cytokines (immune chemical messengers) and IgE antibodies (allergic antibodies).  They can then trigger different immune cells called T cells to change their behavior.

Hydrophobins may play a role in invasive forms of aspergillosis which infect the lungs of immunocompromised patients.  They may also play a role in some mold allergic reactions.

VOC’s from microbes (MVOC’s) are smaller molecules than true mycotoxins.  They are a mix of chemicals that easily evaporate and contribute heavily to the musty smell of moldy buildings.  Besides causing the odor, they may also trigger other neurologic reactions through binding a trigeminal nerve ending.  These symptoms include slowed reflexes and dizziness (1,2), but at higher concentrations may lead to mucous membrane irritation, headaches, attention deficits, and more.  Some patients with asthma respond to these MVOC’s differently than others. The MVOCs may also contribute to motor and sensory changes (3).

Stachylysins arise from Stachybotrys chartarum, better known as “black mold”.  This mold garners much more attention and fear then most of its relatives.  While it does produce other, more regular mycotoxins like satratoxin, black mold may also produce this hemolysin molecule.  Basically, Stachylysins and other hemolysins are able to lyse or break open red blood cells.  This is an obvious problem for health.  It may explain the past outbreaks of pulmonary hemosiderosis, in which infants who were exposed to Stachybotrys developed hemolysis of their red cells in their lungs.

Finally, we reach the likely primary mechanism through which molds negatively impact human health, mycotoxins. These “low molecular weight, non-proteinaceous, secondary organic metabolites” are toxic to other organisms and may be volatile or non-volatile.  While not absolutely necessary for the growth and development of the fungi, they provide some competitive advantages to the mold by helping to kill off neighboring organisms in their environment.

Much debate rages over whether or not these chemicals truly contribute to human disease.   Meanwhile, the agricultural industry and animal studies clearly demonstrate that these toxins harm animals (4,5) even through inhalation.  Hundreds of studies link them with animal and human disease, yet mainstream medicine continues to balk at the reality.

The toxins exert a variety of effects at various entry points either acting individually or synergistically (6).  They can come through inhalation, ingestion, or transdermal.  They can initiate harm and cause symptoms in the respiratory, gastrointestinal, immune, hormone, neurologic, dermal, or other systems.  Their effects depend on entry route, total dose, and synergism between different toxins as well as the health status of the exposed individual.

The comprehensive list of how these mycotoxins set off a domino avalanche of dysfunction and symptoms would require a book or two at least.  For now, I will restate that various toxins tip over dominoes in the immune system, the GI tract, the mitochondria of our cells, the hormonal system, and our neurologic system which lead to the cascade of negative events.  Once the domino falls in that system, further dominoes continue to fall spilling over into other systems and processes.  The domino avalanche continues as far as the interconnections of our body systems extend.

At the end of the day, the proof in the literature and in the clinic cannot and should not be ignored.  While conventional medicine does not understand mold toxicity completely, that does not mean such toxicity does not exist.  Medicine has always advanced by shining light into previously dark areas of understanding and should continue that practice with mold toxicity instead of dismissing it.   Papers like this support our clinic practices of identifying mold toxic patients, guiding them out of mold exposure, and helping them to restore healthier more abundant lives.  We are not waiting on conventional medicine to get their act together.