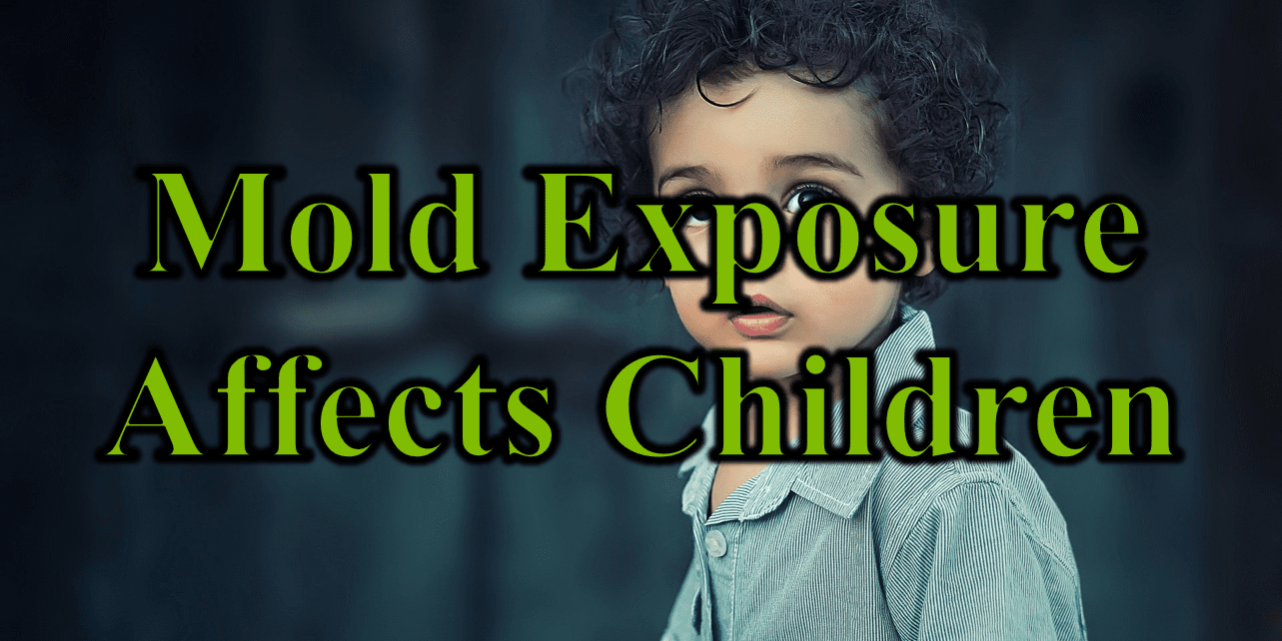 So many parents face the challenge of raising small children with unexplained chronic illness and hear the encouragement that the child will grow out of it sooner or later.  This may cheer parents in the first week or two, but when symptoms continue for weeks or progress in severity and variety, eventually parents want more than a delaying tactic.  Yes, many kids recover from unexplained simple symptoms in 2-3 weeks at most, but some will drag on for week, months, even years.  Some of these parents ask if any environmental exposure such as a toxin might be contributing to their child’s suffering- only, too often, to be dismissed by uninformed conventional doctors.  This study offers a plethora of opportunities to re-educate health care providers on the possible manifestations of mold illness in children, beyond simple allergies.

The primary focus included 3 children who had “confirmed multiple indoor allergen sensitization due to prolonged exposure to unhealthy indoor environment with infestation and water damage” as well as “multiple health problems related to allergy and asthma” and “also developed neuroimmune complications and growth delay.”  Overall, evaluations of the living conditions of these 3 children revealed high levels of Alternaria alternara or Penicilium/Aspergillus molds (the two are indistinguishable under a light microscope) in all their homes.  Immunologic sensitization to these molds were confirmed in the three case study children.

The paper’s authors knew from prior research that water damaged building exposure along with mold exposure had been correlated with a variety of health conditions.  With its publication in 2020 prompted by the increase in time children were spending inside at home, they considered whether increased time in water damaged homes could produce health effects on millions of children.  The children’s burden of exposure to indoor biological particles and volatile organic compounds, they reasoned, might be greatly increased during this time.

The case series focused on allergic symptoms and complications of such allergies, but in reading the cases, one must ask if other mechanisms besides allergies were in play.  They do at least discuss the non-allergic connections between mold exposure and/or the immune system and other non-allergic symptoms. In the paper’s discussion section, they note that other researchers have linked immune activation with the development of seizures (9) or other neurologic disorders (10) including the possibility of links to autism and schizophrenia (11).

In other studies looking at the immune system, exposure to mold in homes was linked to higher rates of various antibody types (IgA, IgM, and IgG) to various “neural-specific antigens (myelin basic protein, myelin-associated glycoprotein, ganglioside GM1, sulfatide, myelin oligodendrocyte glycoprotein, alpha-B-crystallin, chondroitin sulfate, tubulin, and neurofilament)”.  Nerve conduction studies confirmed neuropathic findings in this study in both motor and sensory nerves (13). Overall, another group of researchers “[concluded] that exposure to mixed molds and their associated mycotoxins in water-damaged buildings leads to multiple health problems involving the CNS and the immune system, in addition to pulmonary effects and allergies. Mold exposure also initiates inflammatory processes” [16].  Many cytokines, or immune messengers, have been reported to change levels due to mold exposure.  In a study on Stachybotrys chartarum, “black mold”, levels of Eotaxin, vascular endothelial growth factor (VEGF), MIP-1α, MIP-1β, TNF-α, and the IL-8 analogs macrophage inflammatory protein-2 (MIP-2) and keratinocyte chemoattractant (KC) were more dramatically challenged when mice were challenged repeatedly with the exposure (21).

A few takeaways can also be gleaned from the 3 unrelated cases discussed.  In case 1, a 2 year old boy was found by their pediatrician to be experiencing “unexplained failure to thrive, frequent upper respiratory illness (every 4–6 weeks); wheezing and chronic nasal congestion” and required a hospital admission at 3 months of age for “’atypical’ continuous seizures with apnea”.  Skin testing confirmed allergic reactions to multiple indoor allergens including indoor molds.”  Upon relocation from the moldy home in which they lived with documented mold exposure, growth improved, seizure meds were no longer needed, and asthma was controlled more easily with medications.

In case 2, a 20 month old boy was diagnosed with “allergic rhinitis, asthma, eczema, abnormal movements and crying spells of unknown etiology, growth retardation, and stridor.”  He would experience “Problems with inconsolable crying attacks with unusual hand movements and feeding difficulties” leading to hospital visits.  Therapy for the variety of conditions was rather ineffective and an in-depth workup did not reveal any clear answers.  He later developed abnormal leg movements and rashes with blisters.  Allergy testing confirmed reactions to Aspergillus and Alternaria.  After a house inspection found “unhealthy living conditions (water damage, mold growth, rodent and cockroach infestation)”, they pediatrician recommend relocation.  The patient experience significant improvement occurred in most of the symptoms, with some requiring ongoing medications.

In case 3, “six years seven month old boy presented with AR, allergic otitis media, generalized idiopathic epilepsy, developmental delay, speech impairment and learning disability.”  He was healthy and doing well until the family moved into a water damaged home at age 2 years.  “During a period of 3 years a child had progressive deterioration of development, cognitive skills, exhibited periods of uncontrolled aggression.”  After a water leak was discovered, the family relocated and the boy experienced significant improvement of symptoms and abnormal behavior.  He has another seizure only one more when another mold source was found in his new bedroom.

While the whole paper is worth reading, even these highlights demand a response from conventional medicine to recognize the potential for mold exposure to harm children neurologically.  Until that happens, we in functional medicine will continue to guide parents in restoring health to their children exposed to mold in water damaged buildings.  It is just a part of restoring healthier more abundant lives.

Other references (numbered according to article bibliography)”