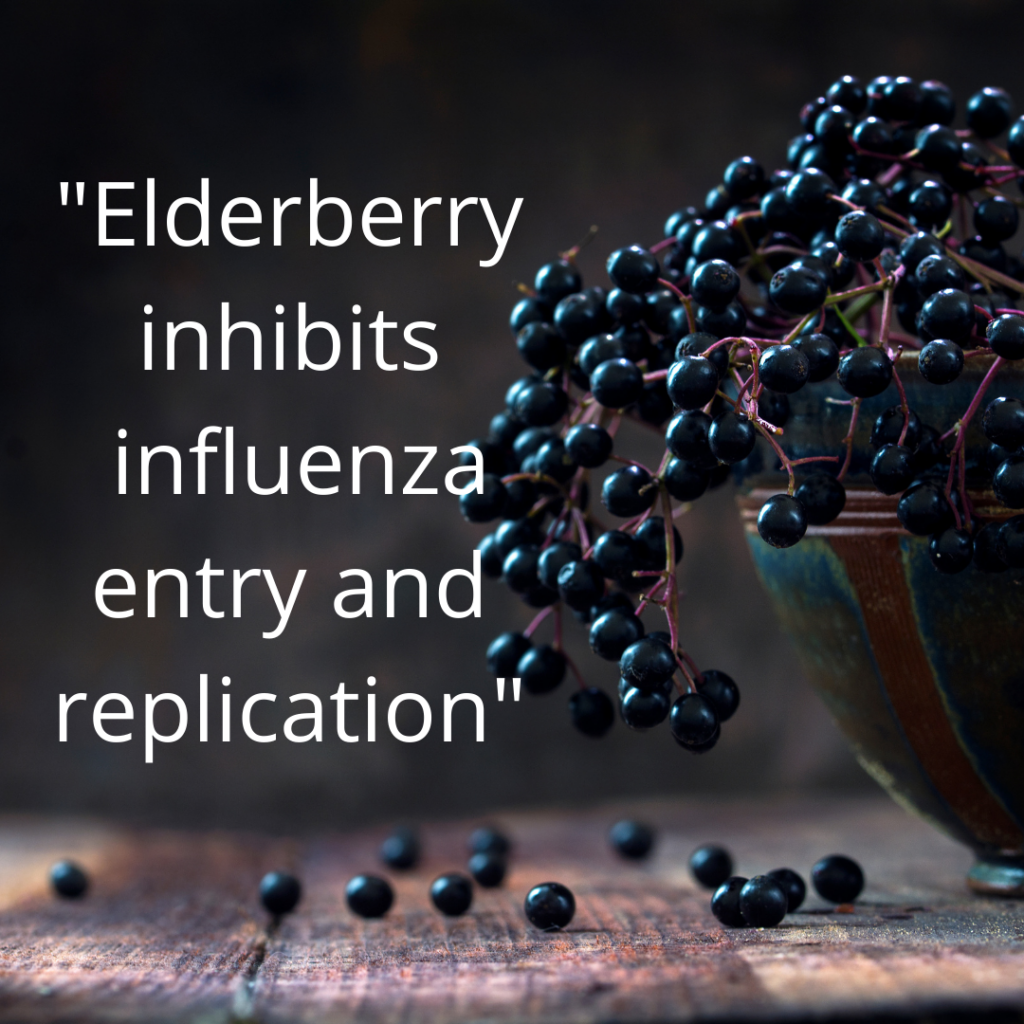 Many may express frustration towards the academic types of medicine, accusing them of having their heads buried so deep in their labs that they don’t appreciate clinical applications.  I agree at times, but this research on the mechanisms by which elderberry inhibits influenza activity could only be done in a lab by such academics.  Many natural remedies receive dismissive looks from conventional medical providers, but mechanisms of action give those of us in functional medicine a stronger standing in the debate.  These researchers used cell cultures and extracts of elderberry, sambucas nigra, to tease out both the initial inhibition of viral entry and later prevention of replication that elderberry exhibits in influenza infection.

The study aimed at identifying active ingredients and at elucidating their mechanisms of action.  Not surprising to functional medicine physicians, they found that there were likely multiple active ingredients working at multiple stages of infection.  The single compound believed to be the primary active ingredient in elderberry, cyanidin 3-glucoside, exerted an early inhibitory effect on viral entry but not later replication after the cells had been infected.  The full extract demonstrated this effect, plus an even stronger effect at the later stages of infection, suggesting other active compounds were present. The later inhibitory effects appeared to derive from modulation of interleukins 6 and 8 along with Tumor Necrosis Factor.

We must remember that this is a study in a cell culture inside a lab and does not automatically prove that swallowing an elderberry gummy drop will cure flu.  Several steps occur between swallowing a dose of elderberry and effects within the body against the viral invasion.  There are differences based on whether one takes the elderberry daily so that levels are always present in case a flu virus lands on the nasal mucosa to invade and waiting for symptoms to hit before swallowing gummy number one.  Then we must remember that the elderberry has to pass through stomach acid, digestive enzymes, and be absorbed into the blood stream.  From there, the concentration of active ingredients must be adequate in the location where the virus enters or where immune cells begin to respond to the viral spread.

This study simply provides plausibility with a mechanism of action.  These studies are critical so that we can not only argue plausibility but better understand how to use elderberry alone or in combination with other therapies.  Better understanding of mechanisms also helps determine dosing for studies in animals or humans.  For example, how much does one need to swallow in order to deliver sufficient active ingredient to the nose for benefit.  Research insights are needed from start to finish so we can push these effective therapies into the mainstream.

With that all in mind, this functional MD seeing patients day in and day out without time to step in a research lab thanks those who never leave the research lab for their hard work and contributions to helping patients live healthier more abundant lives.