The Influence of “D” on ADHD 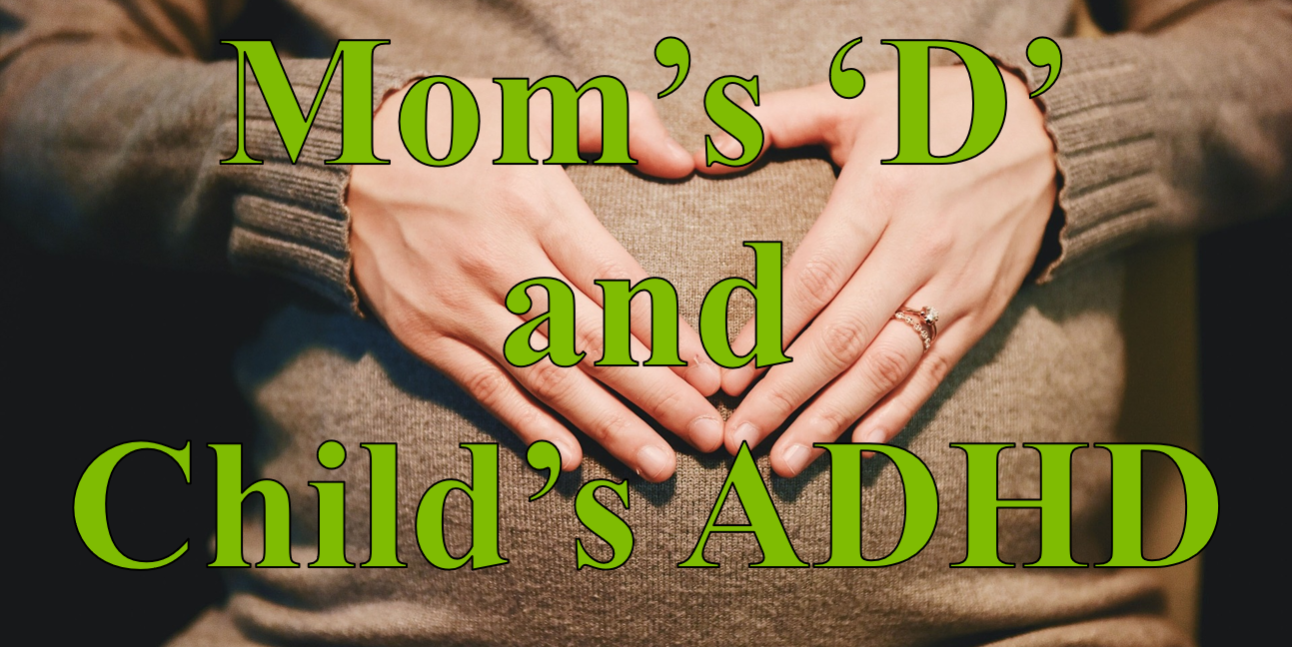 In functional medicine, we are trained to think about root causes and this requires thinking about the upstream.  For example, according to this study Vitamin D can be traced far upstream in the development of ADHD, Attention Deficit Hyperactivity Disorder.  Rather than simply waiting until a disease or symptom occurs and then responding with a medication, these researchers looked at what factors influence the development of ADHD beginning with pregnancy.

With the epidemic of ADHD disrupting children’s lives both individually and collectively in families and classrooms, parents and medical professionals want real answers.  The medications available offer some benefit, but come with side effects like weight loss, insomnia, and growth issues.  Everyone recognizes that a deeper understanding of what contributes to a child’s brain developing structurally or chemically towards ADHD patterns could allow us to prevent instead of just treating ingrained systems.

Other studies have implicated additional factors and more studies are underway.  In this study, researchers looked at one vitamin, vitamin D.  The so-called vitamin, in truth, acts more like a hormone in many ways.  The very structure of vitamin D resembles hormones like progesterone, testosterone, and cortisol, given their common building block, cholesterol.  Unlike other vitamins which generally serve as cofactors in metabolic reactions, vitamin D binds receptors on various tissues, just like other hormones do.  Thus, its origin and its function seem much more hormonal than other vitamins.

In different tissues and cells of the body, different receptors respond differently to Vitamin D’s presence.  Most know that vitamin D causes the intestinal cells to pull more calcium out of the food we eat.  In the brain, it also influences the production of neurotransmitters.  In most cells, it also affects how we respond to other hormones and how we interact with other vitamins like vitamin A.

With this in mind, the potential for a connection between childhood mental health and vitamin D is not far-fetched.  Other studies have linked both minerals and nutrients in children with varying outcomes in terms of ADHD.  This study just went upstream a step to the actual pregnancy and whether or not the mother’s level of vitamin D affected the child’s risk of developing ADHD.

The researchers used frozen samples of blood collected from Finnish mothers during pregnancy.  They took 1,067 children diagnosed with ADHD between 1998 and 1999 and compared them with 1,067 children without ADHD matched by age and sex.  With the usual statistical analysis to eliminate as many other confounding factors as possible, they found statistical correlation for low levels of maternal vitamin D influencing ADHD.

Full access to the paper rather than just the online abstract would provide more information on what level of vitamin D they considered to be low, but their dividing the levels into quintiles was helpful.  This means that they split the test cases into 5 groups based on their mother’s level of vitamin D during pregnancy.  By comparing the lowest group with highest group, the odds ratio resulted at 1.53 with a statistically significant (p=0.01) range.

As always, studies should be repeated given that a large percentage of today’s research fails to show the same results when repeated.  The complexity of studying diseases with multiple factors over long periods of time make it challenging to be confident in study results.  However, given the epidemic of ADHD and the relative safety of vitamin D in pregnancy, not to mention its other benefits, we should be able to implement this intervention for pregnant moms while waiting for further research.  Helping children live healthier more abundant lives begins in the womb.